I wasn’t an athlete growing up. I never really had the chance to become good at sports. First, there was my size. I was a tiny wisp of a girl, a little bird. I vividly remember being called “Bird Legs” by the mean girls. I haven’t gotten over it. One stormy morning at the bus stop, when I was in about the first or second grade, a gust of wind caught the umbrella I was holding and literally swept me off my feet. The little bird catching an updraft. The other kids had to grab me and hold me down.

There was also the fact that I was painfully shy and not the least bit aggressive. I did do gymnastics for a while. It was the perfect sport for a graceful little bird, but my fear of flying into the air, upside down and backwards, limited my ability to compete.

Sports Later in the Game

So, I was almost forty before I got the courage up to to try another sport. One evening at the Little League field, a fellow baseball mom mentioned she’d like to take tennis lessons, and I offered to join her. I had friends who played, and it sounded fun. Plus, I thought I’d look good in a tennis skirt.

Aside from the sporty look it offered, my goal was to get good enough to play with my spouse without the game ending in tears, or someone sleeping in the guest room. I thought it would be a fun new date night activity, or we would play when we went on resort vacations, or in the free time at business conferences. The fact that my husband would much rather read a book in a hammock didn’t cross my mind. I’d entice him with the skirt.

My new friend and I signed up for lessons at the public courts the following week. We arrived for our first lesson in running shorts and T-shirts. We agreed that wearing an actual tennis skirt was something to be earned. We didn’t yet feel like tennis players, so we couldn’t yet dress like tennis players.

Those first lessons were pure theater: tragedy and comedy all in one great show. Tragic because our hopes that we’d turn out to be tennis prodigies were quickly dashed. Everything else was comical.

But we persevered and after weeks of lessons, our coach sat us down for a talk. There’s no point, he explained, in taking lessons for a sport unless you plan to play the sport. We were going to have to play actual games. On an actual team. Against hard-hitting, tennis-skirt-wearing women. The ones we saw on the other courts who carried two or three rackets in bags in which I could pack for a week’s vacation.

We psyched ourselves up and joined the women’s doubles league, at the lowest level, of course. We bought our first skirts, and bags for our rackets and other accoutrements we learned tennis players needed: Advil, Biofreeze, and Bandaids. We transferred from our individual lessons to team clinics.

And soon we played our first real games. There was a lot of love on our court in the beginning (meaning zero points,) but we were playing, we were actually competing. My fortieth birthday came, and my teammates threw a party for me. It was then that I realized there is something really powerful about competing at sports in your forties. At that point in my life, I worked part-time off and on, but was mostly a stay-at-home mom. My triumphs involved getting little people fed and clothed, juggling carpools, and finding energy for those damned date nights.

Getting out on the tennis court was something that was all mine. And seeing myself improving my skills week after week was a huge confidence booster. For the first time in my life, I was challenging myself physically and mentally, and having a blast.

How to Help Your Body Adjust to Daylight Savings

Gradually, we began winning matches. That goal of just playing for fun, with the hubby, on date night or at an oceanside resort? Gone. When you are winning, you move up the rung on your team. We started out playing in the lowest position, court five, but as we got better and more experienced, we moved up the ladder. Even better, our team was winning. As the season progressed, the “Claymates” crept up in the standings. The league championship was within our grasp. Suddenly lobbing balls on date night seemed like such a waste of my talent.

I was playing tennis for myself, but at the same time, I was far from alone in my endeavors. The community of women I surrounded myself at the courts was humbling. My team consisted of women from their mid-twenties, whose baby bumps grew throughout the season and who ran half a dozen errands between the time they left the courts and when they relieved their sitters, to women in their early eighties, who were such seasoned players they could destroy me without breaking a sweat.

I learned so much during those years, but way more about people than about volleys and line shots.I learned that women can beat each other mercilessly on the courts, but lift each other up as soon as they step off the clay. When one of the older players didn’t show up for her weekly game, two carloads of women dropped everything to go check on her. When a player was diagnosed with terminal cancer, her tennis sisters made certain she never sat through chemo treatments alone. When I decided to leave my husband, my teammates held me up for months.

I learned that women can be friends and sisters regardless of age or socioeconomic class or education or race or ethnicity. We played at public courts, not a country club. My teammates, my tennis sisters, came from every walk of life. We celebrated our diversity as much as we celebrated each other’s tennis wins. I learned that, when it’s all said and done, none of us is being paid to play, but what we earn is priceless.

On the courts, we all wanted to win, individually and as teams. Sure, at times there was trash talking, petty arguments, and hurt feelings. But off the courts, we were sisters with a common goal. We were women who supported this sport because it supported us. Being a part of the tennis community was so much more than skirts and standings. It was my life for fifteen years, my lifeline to a sisterhood that, though I have retired, I will belong to forever. 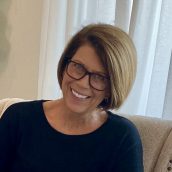 The Makeup Trick You Need in Your Life

Five Girlfriends that Are Key to a Full Life

The Five Girlfriends Every Woman Should Have in Her Life

I Wish We Were All In This Together, But We’re Not

Running Into My 7th Grade Bully