Save Your Color with These Shampoos and Conditioners

So, you’re a wee bit too attached to your phone. As someone who used to check my phone a million times a day, I know the struggle oh so well.

Cell phone addictions are tough to admit and hard to break. According to one study, 66% of the population has shown signs of nomophobia, the fear of being detached from your phone. It can make you wonder what in the world has society come to? Where did we go wrong?

I’ve pretty much been a “tech geek” my whole life. Heck, I’ve been using cell phones since flip phones and Nokia’s were a thing. And when smartphones first came out, I was one of the early adopters.

My cell phone use grew more and more as the years went by (and as technology got fancier and fancier). Fast forward to 2020, and we can practically use our phones for anything: alarm clocks, our calendars, our address books, and a plethora of other things. Phones today are so overloaded with features that nowadays, we may depend on them more than we would like to.

Eventually, I came to terms with the fact that I had a cell phone addiction and I needed to do something about it. I knew that in order to end this habit, I had to break up my love affair with my phone. And guess what? You can do it, too!

How to Be Successful at Cell Phone Rehab

Let me guess: Your phone is your biggest distraction. It’s not surprising. With alerts, notifications, and shiny objects galore, your phone can easily get in the way of your productivity. The best thing for you to do is to remove as many distractions as you can. Here are a few ways that you can do that:

·  Set time limits on apps you tend to spend a lot of time on.

·  If you can, remove all email and social media apps from your phone.

Have No Phone “Time Zones”

Take a breather from your phone every now and then. Better yet, try designating certain times of your day as “phone free” periods. We’re often tempted to check our phones when we first wake up and when it’s time to go to bed. If you normally fall prey to these temptations, cut your phone off in the evenings and keep it off until you’ve gone through your morning routine.

You might also want to put your phone on “Do Not Disturb” mode during work hours. Although they’re easier said than done, these are effective ways to establish those healthy boundaries you’re aiming for.

Our phones have (literally) spoiled us. I wouldn’t say that we’re at the point of no return, but we’re pretty darn close. We have gotten so dependent on our phones that conventional habits may seem kind of ancient, but I wouldn’t write them off as such just yet.

You’re trying to spend less time on your phone, right? Well let me tell you a little secret: The old-school way of doing things is sometimes the most productive way. So go ahead, wear that watch. Get an actual alarm clock. Jot down your thoughts and ideas in a tangible notebook.

The kids may poke fun at you for not “getting with the times,” but you’ll get the last laugh, because you will feel so much freer from your phone in the end. 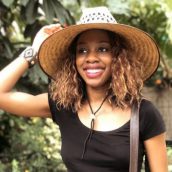 Johnaé De Felicis is a writer, wanderer, and wellness junkie from California. She covers a variety of topics that are relevant to the health and wellness space, from mental health to natural living.

Watching Parenthood with My 13-Year-Old

Could Elderberry Syrup be the Secret to Increased Winter Wellness?

Should You Track Your Teenager’s Location?